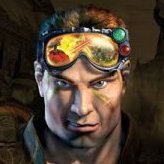 Add IRC Chat to Launcher - Yes or No?