Exiting vehicle at the same time as game ends 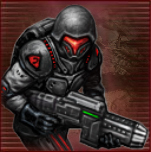