A little visual feedback upon getting a kill would be nice 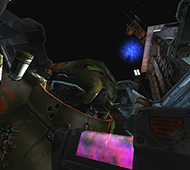