Bot-garrisoned SAM is anti-infantry and anti-tank 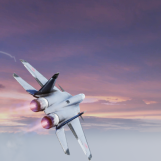